SOUTH MILWAUKEE – A group of residents is hoping to not only bring back memories of the city’s Bucyrus manufacturing era, but also the Bucyrus museum itself, which disappeared more than a year ago.

Bucyrus, which was bought out by Caterpillar Inc. in 2011, has had a big impact on the economy and life of many South Milwaukee residents for over a century. Much of that memory was preserved in the Bucyrus Heritage Museum, which opened in 2009. Ownership of the museum was also transferred to Caterpillar with the buyout.

However, in December 2016, the museum was suddenly closed, the curator and docents were released, and there was no plan for the future of the items that were on display.

Caterpillar ended up moving some of the items to storage in Peoria, Illinois and shipped some items to their mining headquarters in Tucson, Arizona. However, 90-95 percent of the contents of the former museum “up for grabs” according to Bob Jelinek who is one of a number of people who are not content to let a portion of 130 years of history be forgotten.

A group of former and current Caterpillar and Bucyrus employees, opened talks with Caterpillar to get the items.

“The objective was to keep as much of the archive collection intact as possible and re-open at another local location to display the history of Bucyrus as an educational non-profit,” Jelinek said.

He said the committee received a dozen letters of support for the plan from the city, Bucyrus Retirees Group, former executives, historical societies and others.

An agreement was reached in March 2017 and the South Milwaukee Industrial Museum, LLC was formed to take control of the assets from the former museum. The group’s board of directors and advisors acquired some space in a nearby three-story building, which formerly housed the Bucyrus sales department in 1926. 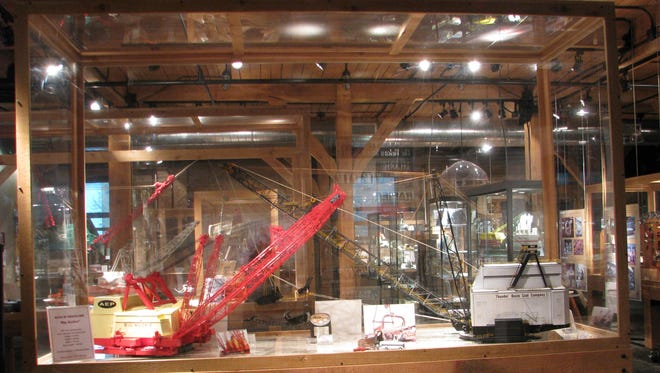 “We also received sufficient funding through private donations and a grant from the Bucyrus Foundation to recover the cost of forming the LLC, insurance, storage fees and the hiring of professional movers Caterpillar required to be employed to move the materials off their property,” Jelinek said.

However, going forward, funding is still a priority as there are not enough funds to open the displays to the public. Jelinek said the group is applying for several grants and working to set things up as a historical and educational not-for-profit museum.

The group has also started a GoFundMe called “South Milw. Industrial Museum” (https://www.gofundme.com/moving-the-sm-industrial-museum). The fundraiser is currently just shy of $9,000 with a $20,000 goal.

The group is also working on a mail campaign to obtain private donations for retirees and others to support the effort at P.O. Box 84, South Milwaukee, WI, 53172.

Jelinek said the process to get non-profit status takes at least nine months. In the meantime, organizers are doing inventory. They’re still getting artifact and archive donations from former employees and collectors.

“I stand behind this work 100 percent and look forward to partnering with this organization to make this a reality,” Brooks wrote on his blog in March.